The World’s Most Determined Vigilante

An Interview with Robert Young Pelton

Robert Young Pelton plying the gap between right and wrong
Robert Young Pelton is the kind of guy you want around when the sh*t hits the fan—wherever that may be. I first met him when we served as contributors to the adventure travel magazineBlue, which launched in 1997. I’ve built a career as a storyteller but gladly zip it when a master like Pelton lets it rip. The feathers in his cap include finding “American Taliban” member John Walker Lindh in Afghanistan in November 2001, and his continuously updated bestselling bookThe World’s Most Dangerous Places. However, they only hint at this unflappable Canadian-born Californian’s lifelong mission to report about, stare down and battle the world’s evil…on the ground and face to face. 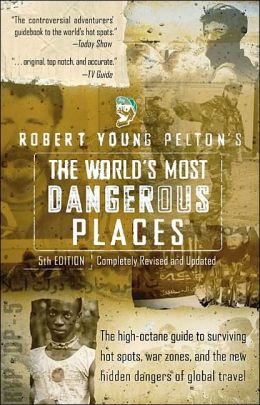 An author of seven books, as well as an extreme journalist, documentary filmmaker, show host, and raconteur, Pelton focuses on reporting conflict and interviewing military, insurgent, and political figures in war zones. His career and reputation are built on a history of entering forbidden, deadly, and otherwise no-go environments—and stirring the pot. There is no denying that Pelton is also one of the ballsiest of travel writers, sharing practical and survival information for people who work and travel in high-risk zones. He’s no stranger to humor, either.

Q. What do hot places, while figuratively on fire, like Afghanistan, Chechnya, Liberia, Mogadishu, Iraq, and Uganda (where Pelton survived an assassination attempt) have in common?

A. They are usually unrecovered from a previous political cataclysm that might have occurred a decade or more earlier. Many of these places are so fragile that less than a dozen armed men can plunge the region into chaos.

Q. What five things should any traveler never forget to pack?

Q. What made you want to track down African fugitive Joseph Kony, and what do you think your chances are of finding him?

A. I have spent twenty years tracking down rebel leaders, wanted men, Jihadis and other people who didn’t want to be found. My chances are good simply because my singular goal is to locate Kony. Many of the other large programs have tangential goals and limited resources.

Q. Where is the most beautiful war or conflict zone you’ve visited?

A. Bougainville. A small island north of the Solomons where there is a smoking volcano, white beaches and beautiful people. I remember sitting on the top of the mountain, helping the late rebel leader Francis Ona try to write the national anthem. It was hard to find anything that rhymed with “Mekamui” or the holy land as they called their island. Bougainville is now open for tourists, by the way.

Q. In the heavens and hells on our globe, is there a human trait that remains constant?

A. People are curious. Ultimately they want affirmation. And they have held their fire when they see a 6’ 4” white man bound across their front lines. 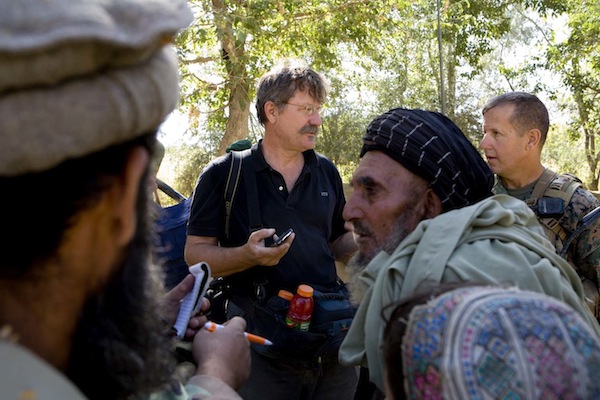 Pelton at a hospital in Bagram, Afghanistan

Q. Can you recommend three destinations—once no-go zones—to visit that are now safe for ordinary travelers?

A. The country of Georgia has the creative and architectural aura of 1920s Paris with spectacular mountains and international intrigue thrown in. Sierra Leone in West Africa has amazing jungles in the north…and even Somaliland. Afghanistan (Bamiyan Valley) and Iraq (Kurdistan) have beautiful and safe places to explore.

Q. In order to gain access, you’ve spent an unusual amount of time living with, traveling with and documenting some of the world’s best known rebel, Jihadi, and insurgent groups in dozens of countries. From a traveling perspective, which group was the most and least entertaining?

A. The most interesting were the Chechen rebels during the 1999 war. Mostly for their bravery and unusual fighting tactics. My least favorite were the FARC rebels in Colombia who seemed to view Marxism as a way to get rich—and have sexy female bodyguards.

Q. When you were kidnapped in Colombia’s Darien Gap by AUC death squads, was your first thought: Fight, flight, or, my daughters are going to kill me?

A. My first thought was to ensure the safety of the two people who were with me. The second was that my wife is going to be pissed.

Q. I enjoyed your Men’s Journal article, “How to Stage a Coup”: You’ve met, interviewed, fought or worked with many intriguing and polarizing world figures, such as Steve Jobs, pirates, mercenaries, prisoners and high-profile killers and fugitives. What makes famous and infamous people tick?

A. Famous people are driven by a need to prove something. It’s probably something buried in their youth. Steve Jobs was an adopted kid who had to prove authority figures wrong. A very angry, unhappy man until he realized that he was one of those authority figures. Rebels are very similar on the intellectual level. I can’t tell you how many tedious, pretentious conversations I have had about revolution, Jihad, and Marxism in jungles with the overeducated and angry sons of affluent people. Whether it’s John Walker Lindh or Erik Prince, they view themselves as being above the rules of survival. It’s the same narcissist profile that the CIA and al Qaeda seeks out.

Q. What is DPx Gear?

A. I have had many people ask why I don’t make “survival gear,” so finally in 2008, I designed a survival knife called the “Hostile Environment Survival Tool” and we have never looked back. I used to be a product designer and marketing specialist, so I suppose it was inevitable. The key is: I develop our products in combat zones and design for a very narrow group of special operations, expedition, and hard use professionals.

A. Well, finding Kony is going to suck up some of my time, including a book and a film on the project. General Dostum has asked for help in getting elected in Afghanistan, and I have a new graphic novel out called Roll Hard about a month I spent in Iraq with an ill-fated Blackwater crew. I just launched a new knife design called the DPx HEAT, and I have my first fictional book calledRaven (about a boy who gets lost in the Pacific Northwest and learns to survive). …And, I’m rewriting The World’s Most Dangerous Places. So, never a dull moment.

*Pelton’s comment on the title of this story: I don’t know that I am a vigilante since I am working within legal framework on the hunt for Kony. 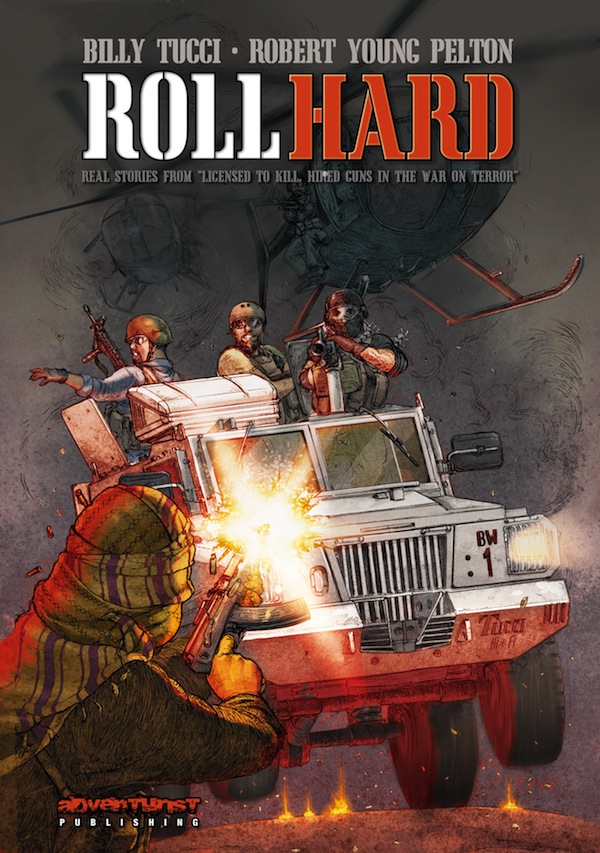