Slovakia inherited some of the best aspects of its five neighbors, enjoying Czech-style brewing, Polish diligence, Austrian architecture, Ukrainian good looks, and Hungarian stews. The one thing Slovakia can claim outright is the fact that it’s an undiscovered travel jewel. Culturally and geographical diverse, it’s simply a beautiful bargain.

Want to experience classic Europe for a third of the price? Here’s your chance to discover what it was like in the 70s. Being the new heart of Europe is more than a motto. Politically, this was Eastern Europe, but with the massive Ukraine to the east now also being recognized as Eurozone, its true geographic center has shifted into the midst of Slovakia’s mountains.

The people here are rapidly waking up from the Communist hangover. Their creative juices are once again flowing, and they relate to the Western approach to enjoying life. Slovakia blends the best of romantic Europe—picturesque countryside, a charming capital city, ghostly castles, Renaissance churches, divine food and period-perfect museums—with the eastward-expanding European Union.

Slovakia, often confused with the former Yugoslavian country Slovenia, is a little nation with a big spirit. My journey started in the often overlooked capital city, Bratislava, a Danube River-hugging spectacle with all the modern creature comforts—without a fat price tag or annoying crowds. The Danube touches four capitals: Vienna, Bratislava, Budapest, and Belgrade. I found Bratislava to be the most chilled out, as I didn’t hear one car horn https://www.the-way.co.uk/ or a person sounding like one. Conveniently located downriver from Budapest and upriver from Vienna, Bratislava is where a woman’s Slovak-to-English musings urged me to exercise my feet and my imagination, “You have to use your fantasia.” Her Slavic accent recalls Russia, however the evolving Europe salutes her free will. Unfortunately, many Danube River boat tourists often fail to appreciate the magic to be found along these cobble-stoned streets.

An hour train ride from Vienna, Bratislava looks at the foot of the fabled Carpathian Mountains, which range all the way down into Romania. In the sprawling Old Town, winding pedestrian walkways pass through city gates and ancient city-wall ruins. Looming regally above on a hilltop, the fifteenth century Bratislava Castle was once the capital of the Hungarian Kingdom. While many Americans deem a 1950’s Los Angeles diner a landmark, the residents of this colorful metropolis won’t soon forget the 1500s.

It’s not difficult to see every corner of this fertile land. Seventy percent of Slovakia is mountains, and I explored its high peaks region called the High Tatras. En route, it seems as if every tenth pinnacle has a fourteenth century medieval castle upon it, or at least the crumbling ruins of one. The eerie ruins kept me on the lookout for a reincarnated knight passing on horseback (while making a beer commercial). The big daddy of them all, Spis (spish) Castle is Central Europe’s largest medieval fortress compound. 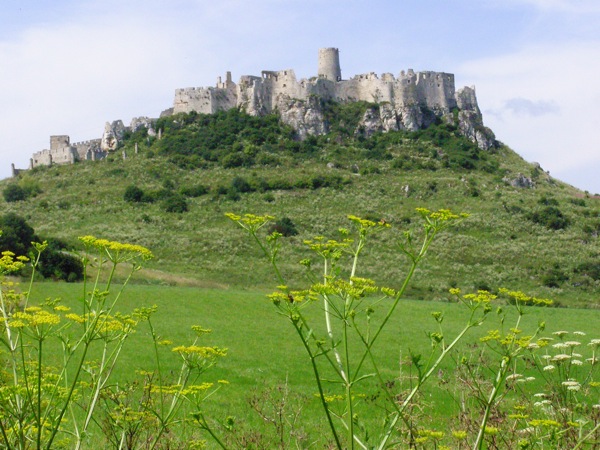 First built in 1209, it was wrecked by 13th century Tatars, and rebuilt in the 15th century. Partially in ruins, it dominates the landscape from miles away and made me ponder phantoms, and life before remote controls. The sprawling Spis region, including the old-world village of Levoca, is a UNESCO World Heritage Site playground. St. Jacob’s Church showcases the world’s tallest Gothic alter and private museum-caliber paintings and sculptures. Gothic churches abound making memorable photography a cinch. 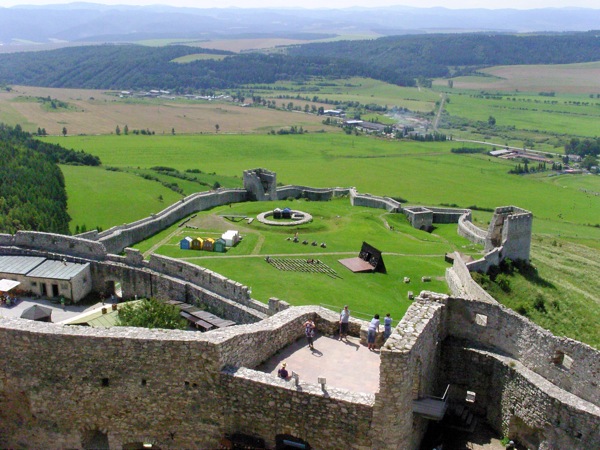 For people more enchanted with the now, the nearby Slovakian Paradise National Park is a wilderness area that’s home to the Hornad Canyon-side hike, which involves a tricky traverse along horizontal ladders, bridges, snaking steps, chain handholds, and footbridges—mostly over a river. Along the numerous trail options, a few restaurants wait ready with sausage and a brew.

The more you see, the more that newly encountered people and places remind you of others met on your life’s journey. The tallest Tatras weave a North Carolina Smoky Mountain feel, as they often attract a cloudy halo. 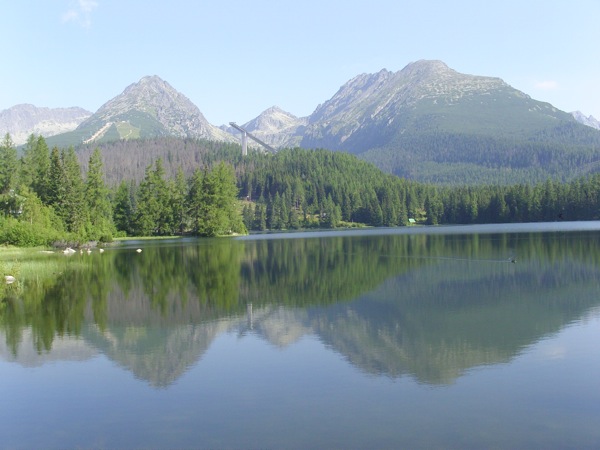 In winter, this range takes on another vibe more reminiscent of the Alps. Strbske Pleso—pleso means mountain lake—is the highest mountain topping out at 8,710 feet. It’s accessible via train from Bratislava, and you can literally walk from the station to the Grand Hotel Kempinski, Slovakia’s version of Yellowstone Lodge. Not a shabby commute. 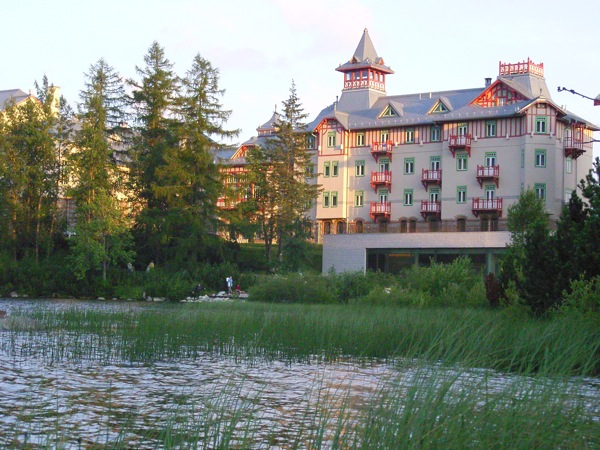 Nearby, Lomnicky Peak (8,635 feet), the country’s second highest, can be summited by foot or cable car. On the summit I was rewarded with views of southern Poland and this factoid: Poland is the only country to elect a professional musician President. The stone building atop Lomnicky offers drinks at the country’s highest café, and for gutsy romantics, a cozy apartment where the overnight rate includes a private dinner service—a way better proposal spot than on a horse-drawn carriage ride. Your chance of meeting an American here is similar to an Americans’ chance of meeting a Slovakian today—a lucky strike either way. (Speaking of luck, the last man to visit the Moon had Slovak heritage.)

Because what goes up must also come down, I made my way to the flat lands, which are salted with 500-year-old manor houses now doubling as swank hotels. 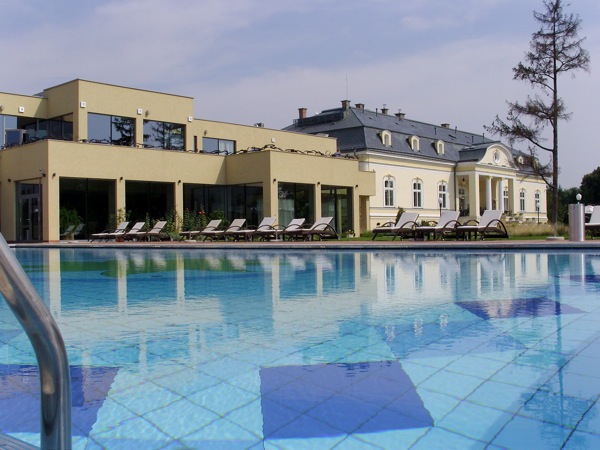 During the 50-year Soviet Regime, most of the historic manor houses or chateaus were converted into orphanages, schools, hospitals, and retirement homes, or left to fall into ruin. The transition from noble family mansions to Communist facilities took its toll. Because it was a Soviet satellite, many otherwise quaint, rural, medieval-flavored valley towns were overshadowed by huge hastily constructed factories adjoined to ugly communist block-style apartment buildings that don’t exactly blend in.

An old Slovakian saying states, “When soldiers come, grass never grows again,” but this patriotic land is proud anew, and a bargain unheard of in the rest of the European Union. It enjoys some of Europe’s best tap water, which also infuses the country’s delightful hand-crafted beers and wines. Slovakia does have a few sharp differences with its neighbors. Czechs are primarily atheists, while Slovaks remain deeply Roman Catholic. And, they’re in an ongoing dispute with Hungary about Danube River hydro dam diversions. But that’s nothing a traveler has to worry about. For visitors, it’s all dobre (doe-bray), a frequently spoken Slovakian term meaning good or ok. In truth, now that Prague is a busy crossroads of colliding tourists, Slovakia is where you can still feel the splendor of once-reigning Austria and Hungary—but more vitally, the atmosphere of reinvention.

With the Iron Curtain fallen and Moscow deemed irrelevant, the resurrected geographic center of Europe shares a time-tested Slovak maxim: “He who digs a hole for someone else will fall into it themselves.” Something else fell into that hole, and it surely wasn’t the unbroken Slovakian spirit. Cheers. The old chapel bells toll yet again.

* Old Town Bratislava’s thirteenth century Hotel Arcadia, near equally-seasoned St. Martin’s Cathedral and arguably the country’s best hotel, is everything a five-star hotel should be, without gratuitous effort. 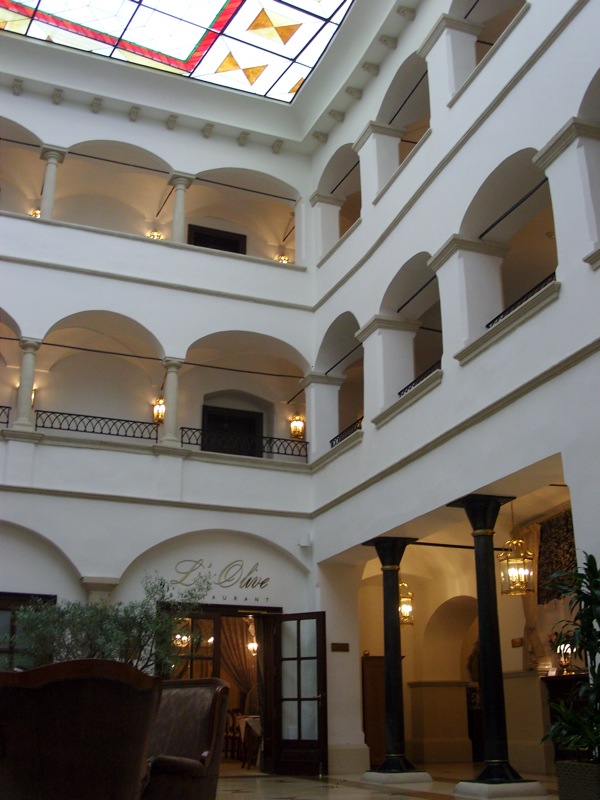 * The Danubiana Art Museum is Slovakia’s MOMA on an island in the Danube River near Slovakia’s visible intersections with Austria and Hungary. Light plays with masterpieces inside and on the outdoor art sculpture park promenade. www.danubiana.sk. Nearby is a human-made whitewater kayakers’ paradise/theme park, Cunovo, fed by diverted river water. 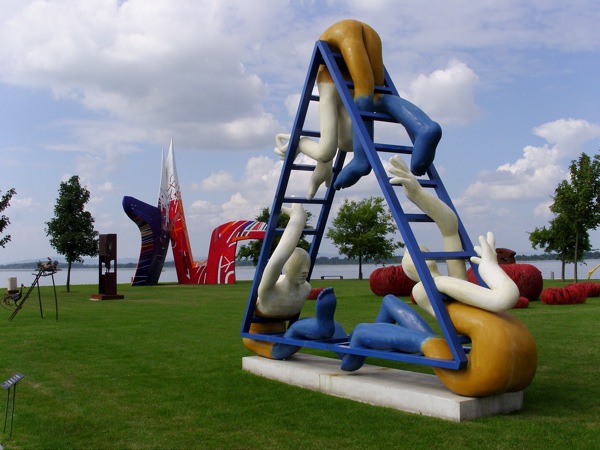 * Hotel Amade Chateau, only 30 minutes outside Bratislava, is a romantic castle-hotel/spa and gourmet restaurant evoking the Versailles era of Louis XVI. The adjoined plush spa complex features a Turkish hammam sharing that ancient style of wellness. This classic, manicured manor house has 20 double bed rooms and 10 apartments. It’s one of the rare places in Slovakia serving afternoon tea—inside one its many noble rooms or beside one of their deluxe pools.

* Kremnica is home to a castle (yup, another dazzler) and a famous mint (Mincovna) that’s been pounding out coins and medals since 1329 when it struck the first Old Hungarian groschen coins.

* Alpine-lakeside Grand Hotel Kempinski luxuriates in the High Tatras, with grand being the key declaration. It reminded me of a down-to-earth Swiss resort movie set.  Not far from the epic Spis Castle,

* Red Stone Castle, one hour from Bratislava, is a mountain-top, moated fort built in the sixteenth century. The four canon-loaded bastions, some with bat soundtracks, were later used as wine presses and wine cellars. Today, the slate and red limestone masterpiece’s great halls host special events. The original structure at this location built in the 1230s, was demolished for new construction.

* Private guide-extraordinaire, Eva Cubrikova, knows and loves every inch of this country. Email her

* In 1925 a Slovakian invented the resonating Dobro guitar, which now sounds good in every language.

* The gypsy (who prefer to be called Roma) presence in Slovakia polarizes opinions like any racially tense situation in America. The Roma landed in Europe after leaving India in the tenth century. They’re a small fraction of Slovakia’s 5.5 million people, but the fastest growing population sector. The Roma contribute liberally to the arts, with a knack for music and poetry.